“América Utópica” is an ongoing art project that uses crowdsourced skin tones, data, language, and other materials to create mixed-media works that explore themes of race, migration, sense of belonging, identity between communities, and my indigenous identity.

Discovering as an adult that I am a descendant of indigenous peoples from South America combined with my experience of migrating to the United States in 2014 shook my past understanding of who I was. It made me more interested in colorism, how minorities reconstruct identities, a migrants’ sense of belonging, our collective trauma, and the historical erasure of indigenous groups.

While I navigate these subjects and try to understand the historical and political implications of identity, I can’t help but perceive myself as “the other.” My otherness as a woman, as a Latin American immigrant, and as the byproduct of colonialism has made me feel that I belong neither here nor there; like if I occupy a space in between. This sense of otherness has led me to create works that aim to reconnect me with my ancestral Indigenous culture. It also allows me to create moments of belonging, and to retake ownership of my cultural identity, long erased and silenced by the historical white, colonial gaze.

Historically, black, indigenous and people of color have been – and are – marginalized, discriminated against and underrepresented. Migrants negotiate with a feeling of both acceptance and rejection, being native and outsider, like if we no longer belong in our country, but neither we do in the current place we live in.

To speak about my migrant experience and connect it to the context of the United States, I create demographic portraits of America using skin colors submitted by participants.

When the confinement started in March 2020 in the U.S., my portraiture work was completely interrupted. Soon after, the socio-political situation in the U.S. took a turn over the death of George Floyd who was brutally murdered at the hands of the police. This situation made me shift during this period in the way I work. I began collecting images of skin tones via an open call to create work. My curiosity for skin tones steadily and expansively grew since I moved to the U.S. and had to fill a migration form for the first time, and then the United States Census.

By exploring my ancestors' culture, and my American immigrant experience, I am creating connections between my identities in the present time. These connections reinforce my vision of a more just future.

"Shine America 2043” (2021) is a direct interpretation of the 2011 U.S Census data prediction, which states that all the non-white groups combined will be the majority by 2043; surpassing the white population in numbers and making up more than half of the U.S. population. Mirroring this data, I’ve created this color study composed of 61% of skin complexion tones from people who self-identify as BIPOC and 39% of skin tones from people who self-identify as white. Each square represents the skin tone of a person who lives in the United States. Additionally, the participant’s first name is imprinted on each square. The work aims to show the diversity of the United States, to be a positive message of hope, and to question the actual space that is given to people of color in society.

“Somos Millones (We are Millions)” (2022) is a LED-lit three-dimensional mixed-media artwork made using obsidian stone, paint, and wood. The phrase “somos millones” makes reference to the Mapuche Indigenous population in Argentina and Chile. Additionally, the use of obsidian stone, which has been vastly used by the pre-Columbian civilizations, refers to its symbolic meaning, “A mirror that reflects.” In using the stone, I create a metaphor that includes my own reflection.

“Hechos del Mismo Barro (We are Made of the Same Clay)” (2022) is a photographic mural that uses crowdsourced skin tones to represent the demographics of the city. It is composed of hundreds of four-inch square tiles ranging in hues from light tans to warm browns, blush pinks to dark browns arranged in order of how they were received to avoid hierarchy. By reducing the submitted skin tone photographs to colored squares, I look to convey our similarities and erase our differences as people.

The photographic mural is an ever-evolving work that changes according to the demographics of the city for which it is produced. Ultimately, the work becomes a demographic portrait that represents the diversity across regions.

“Hechos del Mismo Barro” borrows the name from a popular proverb which has been modified to convey the idea that we all are the same. 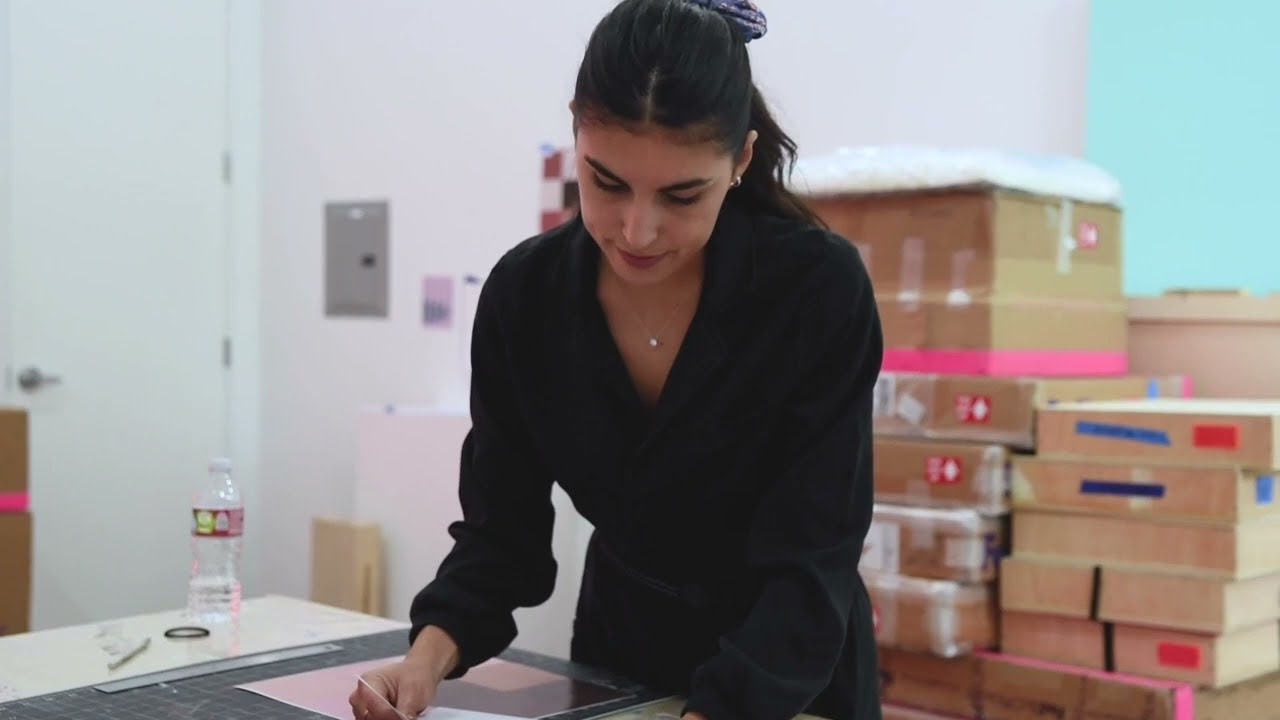